Getting Started With IEAT Preparation

INSEAD’S Global Executive MBA (INSEAD GEMBA) programme is one of the top choices for executives looking to elevate their career to the top management level. The 14 to 17-month programme will take place in 3 locations – Europe (France), Asia (Singapore) and Middle East (Abu Dhabi).

The INSEAD Admissions Test (IEAT) is a required component to the program (alongside the GMAT/EA), which provides candidate with a chance to be up close and personal with the school’s admissions board.

Analysis and absorption of the challenges and opportunities facing a business. Presentation and discussion to adjudication panel of candidate’s analysis

Below are some sample IEAT questions for each section – can you answer them all?

Directions: The following passages will be accompanied by relevant questions. After reading a passage, answer the corresponding questions based ONLY on information given or implied in the text.

Prior to merdeka (national independence) in 1957, Malaysia was a British colony known as Malaya. During the Japanese Occupation of Malaya from 1942-1945, some Malayans carried out attacks on the Japanese from hidden jungle strongholds. Many of these guerrillas were ethnic Chinese members of the Malayan Communist Party (MCP), which refused to accept the return of Malaya to British control in 1945. With jungle warfare skills honed fighting the Japanese, the MCP guerrillas did not hesitate to use force in support of their campaign against British rule—British officials and businessmen as well as local residents identified with British interests were targeted for assassination by bands of communist fighters. As a result, the colonial government declared a State of Emergency on 18 June 1948.

The MCP insurgents depended on supplies taken voluntarily or otherwise from ethnic Chinese villagers living near the fringes of the Malayan jungle. Although few villagers were communists, many of these poor farmers had grievances against the Malayan government, which had failed to fulfill an earlier pledge to provide an easier path to full Malayan citizenship for ethnic Chinese residents. Moreover, any villager who refused to hand over food or money to communist guerrillas was likely to be executed on the spot.

Under these circumstances, Malaya Director of Operations Sir Harold Briggs formulated a plan that became the cornerstone of British strategy for dealing with the Emergency. The Briggs Plan had two interrelated aims—to provide a better standard of living for rural Chinese Malayans and to cut off the MCP from its source of supplies. To achieve these aims, some 400,000 rural Chinese were forcibly relocated into 450 “New Villages” surrounded by barbed-wire and guarded by police personnel. Some New Villagers complained of confinement in what they viewed as a concentration camp. Others appreciated the improved amenities provided for New Village settlements—including schools, shops, and dispensaries. From a military standpoint, the Briggs Plan was a resounding success: as the influence of the MCP gradually waned, the Malaysian government finally declared an end to the Emergency on 31 July 1960.

Which of the following titles best summarizes the contents of the passage?

According to the passage, all of the following are true of the Briggs Plan EXCEPT:

The passage describes the origins of the Malayan Emergency and the strategy by which it was eventually overcome.

The passage does not state that all New Villagers were former squatters who lacked legal title to the land on which they lived prior to relocation.

Directions: For the following question, do your best to analyze the argument/situation and pick the best possible answer choice.

Given the above conditions, which one of the following must be true?

The Feudalberg Charter of Civil Rights guarantees citizens’ freedom of expression. As a result, political expression (including both speech and symbolic conduct) is considered protected expression. However, seditious expression, defined as speech or conduct that aims to incite or is likely to cause the unlawful overthrow of the duly-elected government, has never been accorded any legal protection. Hence, despite the fact that burning the Feudalberg National Flag is symbolic conduct undertaken for political purposes, flag burning should not be classified as protected expression.

The conclusion above depends upon which of the following assumptions?

The conclusion follows only if one assumes that flag burning is more like sedition than it is like forms of protected symbolic expression.

Directions: For the following questions, solve each question and indicate the best answer.

Table below gives the fuel consumed (in liters) and distance traveled (in kilometers) by four cars from 2001 to 2005. 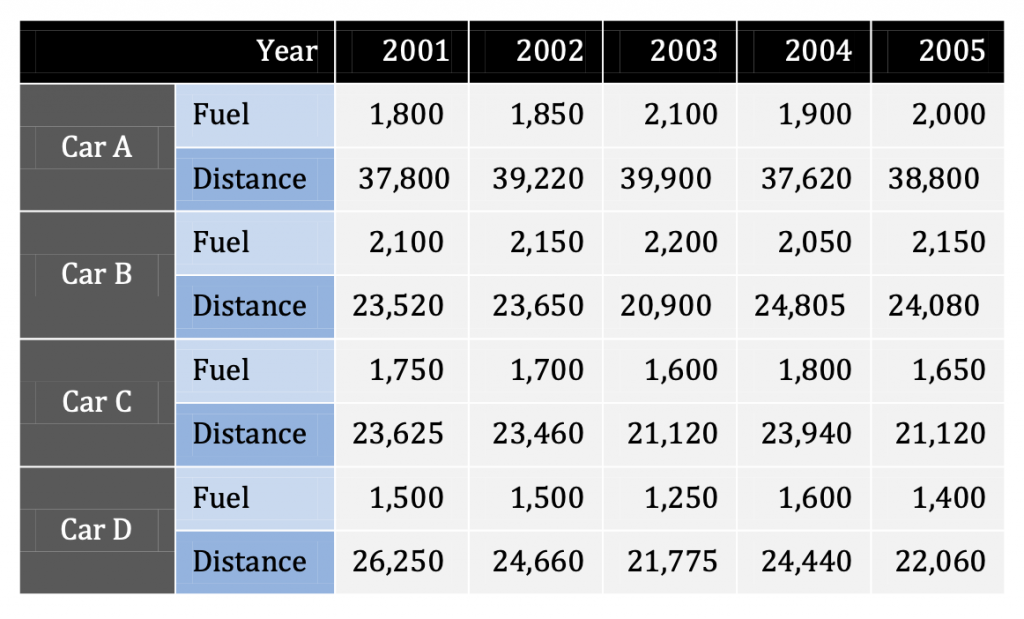 Graph below gives the fuel efficiency (distance traveled per a liter of fuel consumed) of car D from 2001 to 2005. 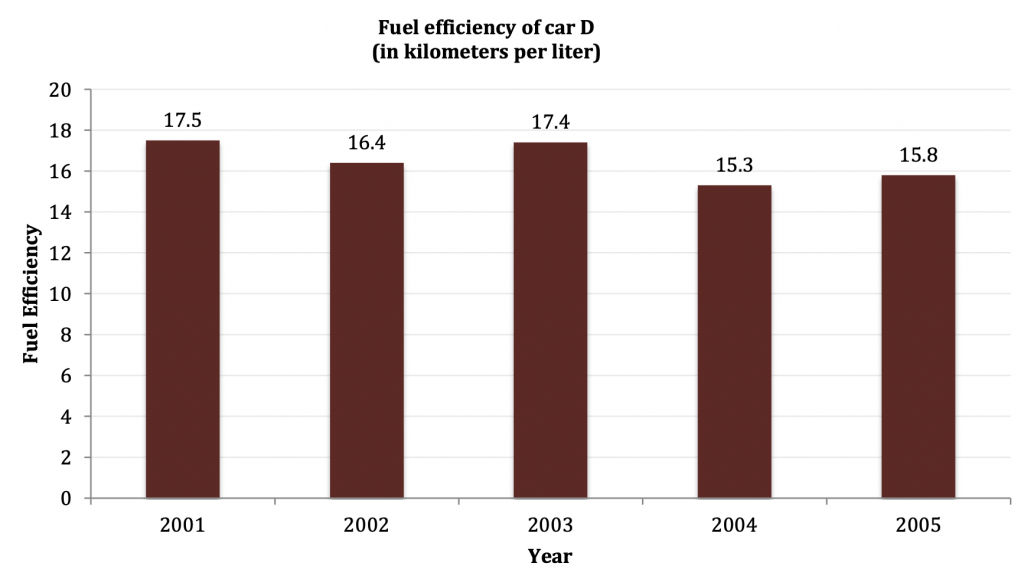 By what percent did the total distance traveled by cars B and C change from 2002 to 2005?

Directions: For the following questions, solve each question and indicate the best answer.

Want more practice questions for the IEAT, or to attempt a full-length case presentation? Prep Zone offers a full-length IEAT practice test in our office. Simply register your details with the following form and come to our office to attempt the test! Keep in mind you will need to set out at least 2-3 hours for the test and the review session.